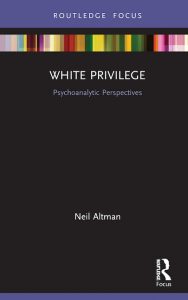 White Privilege: Psychoanalytic Perspectives looks at race and the significant role it plays in society and in clinical practice. Much of the effort going into racial consciousness-raising rests on the concept of unearned “white privilege”. In this book, Neil Altman looks deeply into this notion, suggesting that there are hidden assumptions in the idea of white privilege that perpetuate the very same racially prejudicial notions that are purportedly being dismantled.

The book examines in depth the structure of racial categories, polarized between white and black, that are socially constructed, resting on fallacious ideas of physical or psychological differences among peoples.

Illusion, Disillusion, and Irony in Psychoanalysis

llusion, Disillusion, and Irony in Psychoanalysis explores and develops the role of illusion and daydream in everyday life, and in psychoanalysis. Using both clinical examples and literary works, idealised illusions and the inevitable disillusion that is met when reality makes an impact, are carefully explored.

Idealised phantasies which involve a timeless universe inevitably lead to disillusion in the face of reality which introduces an awareness of time, ageing, and eventually death. If the illusions are recognised as phantasy rather than treated as fact, the ideal can be internalised as a symbol and serve as a measure of excellence. Steiner shows that the cruelty of truth needs to be recognised, as well as the deceptive nature of illusion, and that relinquishing omnipotence is a critical and difficult developmental task that is relived in analysis.

Illusion, Disillusion, and Irony in Psychoanalysiswill be of great use to the psychoanalyst or psychotherapist seeking to understand the patient’s withdrawal into a phantasy world, and the struggle to allow the impact of reality.

Translation/Transformation
100 Years of the International Journal of Psychoanalysis

>>>   Routledge: The New Library of Psychoanalysis
Copyright Year 2021  (Cover not available yet)

Translation is at the heart of psychoanalysis: from unconscious to conscious, experience to verbal expression, internal to enacted, dream thought to dream image, language to interpretation, unrepresented to represented, and transference of past to present.

The book’s first part discusses the question of translation, literal and metaphoric. Both linguistic and cultural translations are closely tied to specific and significant personalities who were involved in the early history of psychoanalysis and thus in the development of the IJP. There was a close relationship between the IJP and the visual arts via the Bloomsbury Group. The link between the visual arts and the IJP is indeed to be found in its logo, which is taken from a painting by Ingres. The second part of the book approaches transformations between psychoanalysis and the arts from conscious, unconscious and non-represented elements into non-verbal modes, specifically visual, poetic and musical; it also looks at the developments and transformations in psychoanalytic ideas about artistic expression as expressed within the pages of the IJP.

This book will be of great interest to psychoanalysts and psychotherapists, and to those interested in the history of psychoanalysis and the IJP.